Considered the founder of Cincinnati's historic Music Hall, Reuben Runyan Springer was a businessman and "a lovable old philanthropist" who generously supported many causes. It was not only his contribution which insured the construction of Music Hall, but it also was Mr. Springer's idea that there should be such a structure.

Reuben Springer was born in Frankfort Kentucky, in on November 16, 1800, into a large family. He left school when he was thirteen and took a job as a clerk in the Frankfort post office.

He later succeeded his father as postmaster, but it's said he really didn't like the work.

Eventually he answered the romantic call of life on a river steamer. He became a store clerk on the Ohio River steamboat, the George Madison, which ran between Louisville and New Orleans. When a better opportunity came along in 1826, he transferred to the George Washington.

In 1830, his innate ability was recognized, and he was admitted to the firm of Taylor, Kilgour & Company, owners of the George Washington and other boats. This Cincinnati-based company was a wholesale grocery and merchandise house—the biggest business of its kind in Ohio, Kentucky, Indiana, and throughout the south - and used the steamers to move goods from New York by way of New Orleans.

He married Jane Kilgour on January 30, 1830. Jane was the daughter of one of the owners of the company. They had no children.

It is said that he had a calm dignity, which at times gave him the appearance of coldness. It was, however, based in modesty and quiet self respect.

Springer himself lived simply in a gray stone residence at the northeast corner of Seventh and Plum Streets, a block from St. Peter in Chains Cathedral, where he worshipped. When the Cathedral was relocated to its present site from its original structure on Sycamore Street, Reuben Springer was the biggest donor.

"Some Views About a Musical Hall Building"

Legend has it that during one of the performances of the 1875 May Festival, the second to be held in the city, a strong storm came through the city. The noise of the thunder and the hail hitting the tin roof of Sangerfest Halle was so strong and insistent that Mr. Theodore Thomas, the music director, had to stop the performance until it passed.

Reuben Springer was in the audience and he was unhappy that this interruption had occurred. It is believed this was the genesis of the idea for Cincinnati's Music Hall.

I have done but little beyond starting the good work – the great labor, the small and careful management, the dogged untiring perseverance and determination to compel success, and which has achieved it, belongs to the others.

In initiating his gift for the construction of Music Hall, Mr. Springer stipulated that his bequest for $125,000 be for matching funds, with the rest donated by others in the community. However, each time the construction project seemed doomed, he opened his accounts and wrote additional checks: $20,000 in November 1875; $20,000 in April 1877; and an additional $20,000 in 1878.

His generosity led the press and others to call the project "Springer Hall." However, with his characteristic modesty, Mr. Springer wrote:

This hall, when built, will be out of the donations of the citizens of Cincinnati, the ground on which it is built is the property of the city, and there is eminent fitness in naming it Cincinnati Music Hall.

Mr. Springer was not, however, finished with his contributions. He gave generously toward the construction and installation of the great Hook and Hastings organ. In addition Reuben Springer provided another $50,000 for the Exposition wings.

He was also a major contributor to the College of Music, which was created after Music Hall was built.

Gifts for the Arts and in Support of His Faith

While mostly associated as the "patron saint" of Music Hall, Mr. Springer was very interested in the arts, owning a personal collection purchased on trips to Europe. He also helped fund the Cincinnati Art Museum and Art Academy.

As mentioned before, Mr. Springer was unusually modest for a man of his wealth and stature. He was a convert to Catholicism and was devout in his faith. Even when he was a senior citizen, he was described as fit and vigorous. He was often seen riding through the streets of the city on his handsome gray horse.

Mr. Springer died on December 10, 1884 after a brief illness. A memorial service was held for him at Music Hall on January 11, 1885. Despite the January weather, thousands attended to pay their respects. 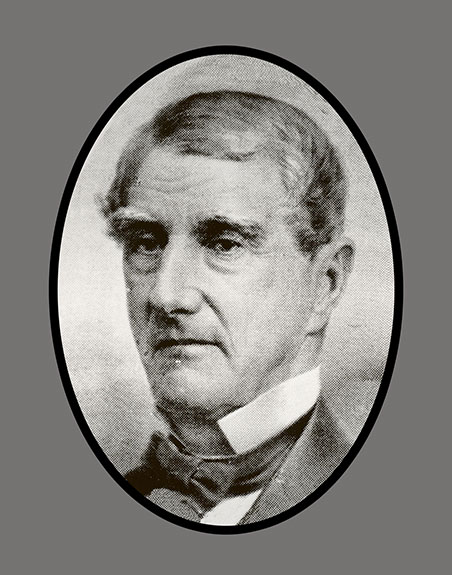 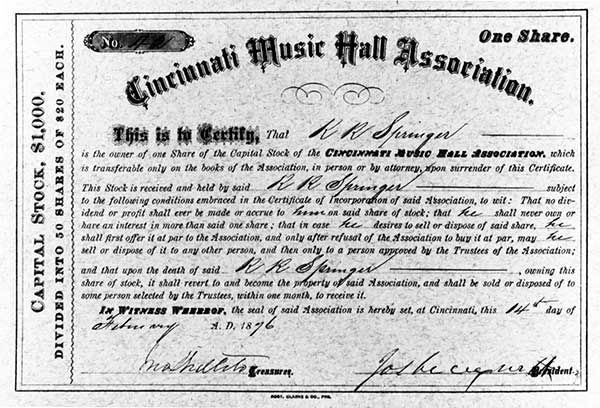 The statue of Reuben Springer, which was installed in Music Hall's vestibule on Friday, May 12, 1882, and was dedicated the following Monday. Sculptor Preston Powers designed and created the likeness of Mr. Springer.

If the name "Powers" sounds familiar, it's because Preston Powers' father was Hiram Powers, one of the most influential and best-known of 19th century sculptors. Hiram Powers lived and worked in Cincinnati from 1818 until the 1830s. During that time, his innate talent was realized and supported by Nicholas Longworth. Hiram Powers later relocated to Florence, Italy, and while he intended to spend just a few years in that city, he never returned to the states.

The Springer statue was carved in pure white Carrara marble and rests on a pedestal of dark marble. Including the base, the statue tops out at just over 11 and a half feet.

On the sides of the pedestal, in bas relief in gilt letters, are the words "Springer," "Music," "Art," and "Industry."

Reuben Springer refused to acknowledge the statue and did not attend the dedication ceremony. In the nicest possible way he shunned the spotlight, preferring to quietly improve the lives of others.

Look closely at the statue and you'll see one button of Springer's vest undone. Why did the sculptor do this?  Follow this link to discover the story.