Mr. Benn Pitman of the School of Design described the panels on the screen of the great organ as

an open folio, on which is inscribed musical sentiment, history, and poetic fancy.

The screen's design centered on music, of course, and expressed the significance of nature—reflecting music's origin within the early reed instruments, bird songs, and the rustle of leaves.

Within the design, there was a morning theme, and one each for noon and night. The morning-noon-night cycle was placed directly above the organ's keyboard.

On the screen, the names of 15 Western composers were placed on the towers of the organ front. The background for each of those panels features flowers or greenery that is associated with that man, his compositions or his nationality.

Five or more of the panels represent the seasons:

A Labor of Love

An estimated hundred and fifteen people worked on the screen. These were mostly women and they all donated their time. The women would take the panels home and devote their leisure time to working on them. The women returned the panels toward the end of the project for assembly.

Overseeing the carving of the screen were three Englishmen who had settled in Cincinnati: Henry Fry, his son William H. Fry and Benn Pitman.

The Frys had their own school of carving and design, while Pitman was in charge of the University of Cincinnati School of Design.

The work was divvied up between the two schools. Henry Fry and his students would design and carve the larger panels which would be placed in the center portion of the organ. Students at the School of Design would carve panels to cover the end sides.

The panels were made of native wild cherry and they include the names of the great composers: Schumann, Schubert, Wagner, Beethoven, Mozart, Haydn, Bach, Rossini, and others.

Over 100 panels were created. Many were signed by the persons who designed and/or carved the panel.

In the mid 1890s, Trustees of the Music Hall Association announced they would remodel Music Hall. Mr. Pitman approached the group and told them that only half of the contemplated decoration had been done when the organ was installed in Music Hall.

He was given the opportunity of the renovation to engage art students to carve new panels for the organ.

During that remodeling, the organ was moved back 16 feet. At that time, the panels covering the rear of the organ were removed completely and returned to Mr. Pitman.

Throughout the year, the main panels remained, even when the organ itself was overhauled on several occasions.

Then, in 1971, it was determined that the organ needed to be replaced. The organ screen was removed and dismantled, and many of the pieces were auctioned off.

The remaining panels were stacked in Music Hall's basement. Some were given to donors. A few were displayed in museums. Two large carvings were on the wall by the north staircase. A dozen were hung in the orchestra pit. Unfortunately, though, when the pit was lowered, the walls were covered with drapes to absorb the light of the musicians' lamps.

Searching For the Organ Panels

Since 2011 board members of Friends of Music Hall (formerly Society for the Preservation of Music Hall - SPMH) have worked to identify, retrieve and restore as many of the panels as possible. 30 were tracked down by the time Music Hall reopened after the revitalization. These panels were sent to conservator Tom Heller in Nashville, who restored each rare cherry wood panel.

Another panel, titled "Morning" was one of the three originally placed directly above the organ's keyboard. "Morning" is on display at the Cincinnati Art Museum. "Noon" is in the home of a former employee of Cincinnati Music Hall.

Since 2017, information about a handful of panels has surfaced. Others remain in the owners' homes.

In 2021, Friends of Music Hall was honored to receive from Jeanne Schmidt the gift of three panels. These panels will be restored and added to the Taft Suite display.

February 22, 2022 proved to be an auspicious date as Carol, Sara and Elizabeth Lichtenberg arrived at Music Hall with the stunning "Mendelssohn and Lilies" panel. They graciously decided to gift the panel, to be added to the ones hanging in the Taft Suite, in memory of Thelma M. Lichtenberg.

The Display of the Art-Carved Panels

Utilizing space that was once a carriage lane between Music Hall and the south wing, the 2016-2017 Music Hall Revitalization created a new "room" in Music Hall: the Taft Suite. These beautiful works of art are displayed in that room.

Review tour dates and times and sign up for a Music Hall Tour!

Below is a video created by award-winning Cincinnati-based filmmaker Melissa Godoy that describes the importance of the art-carved movement and illustrates the restoration of one of the panels. 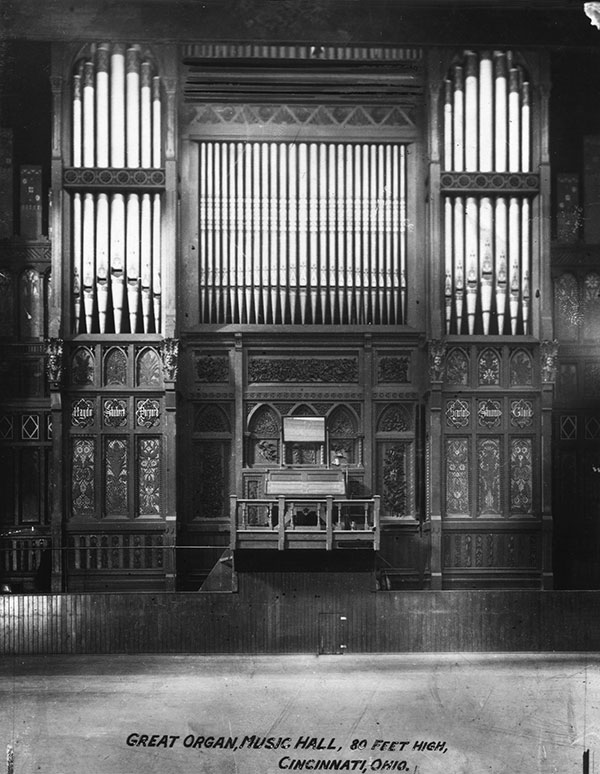 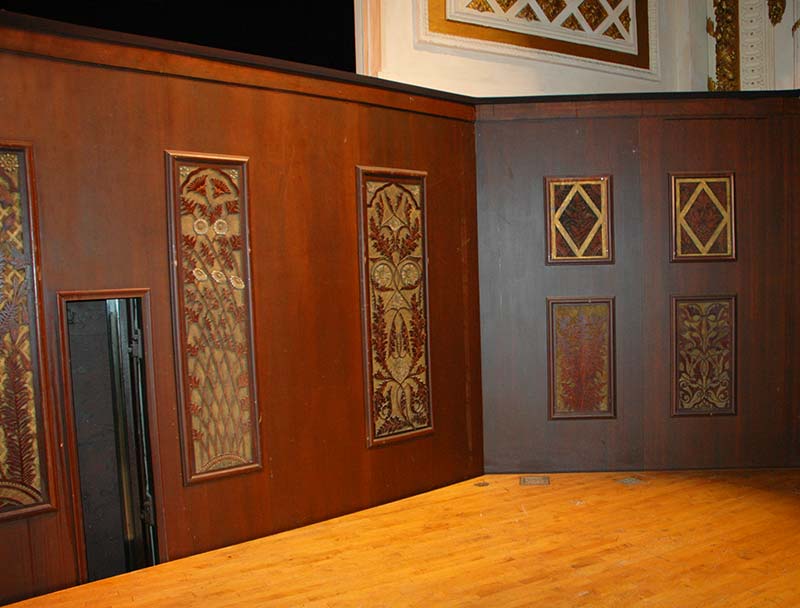 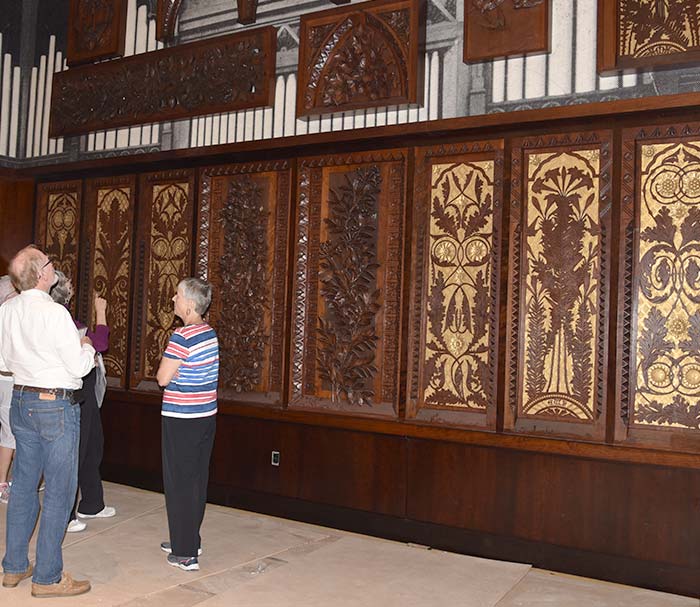 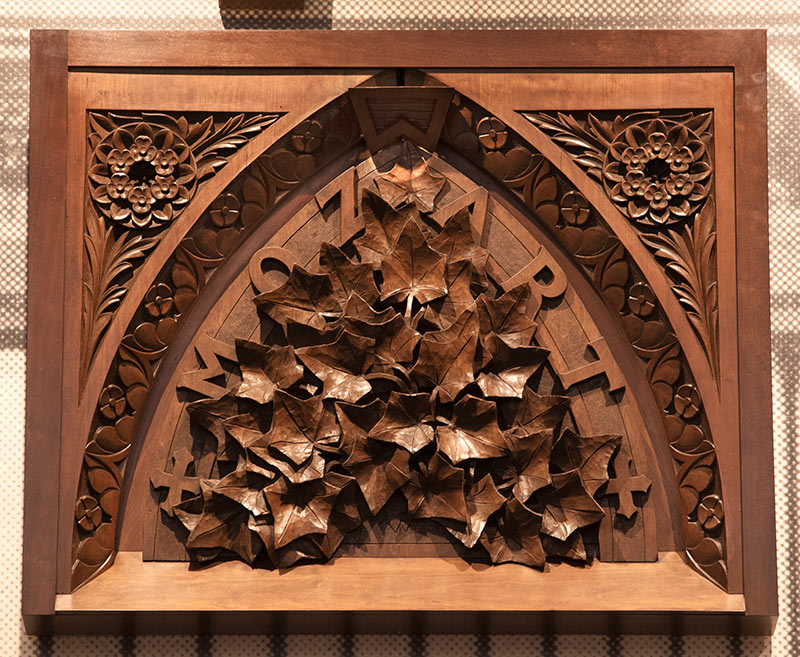 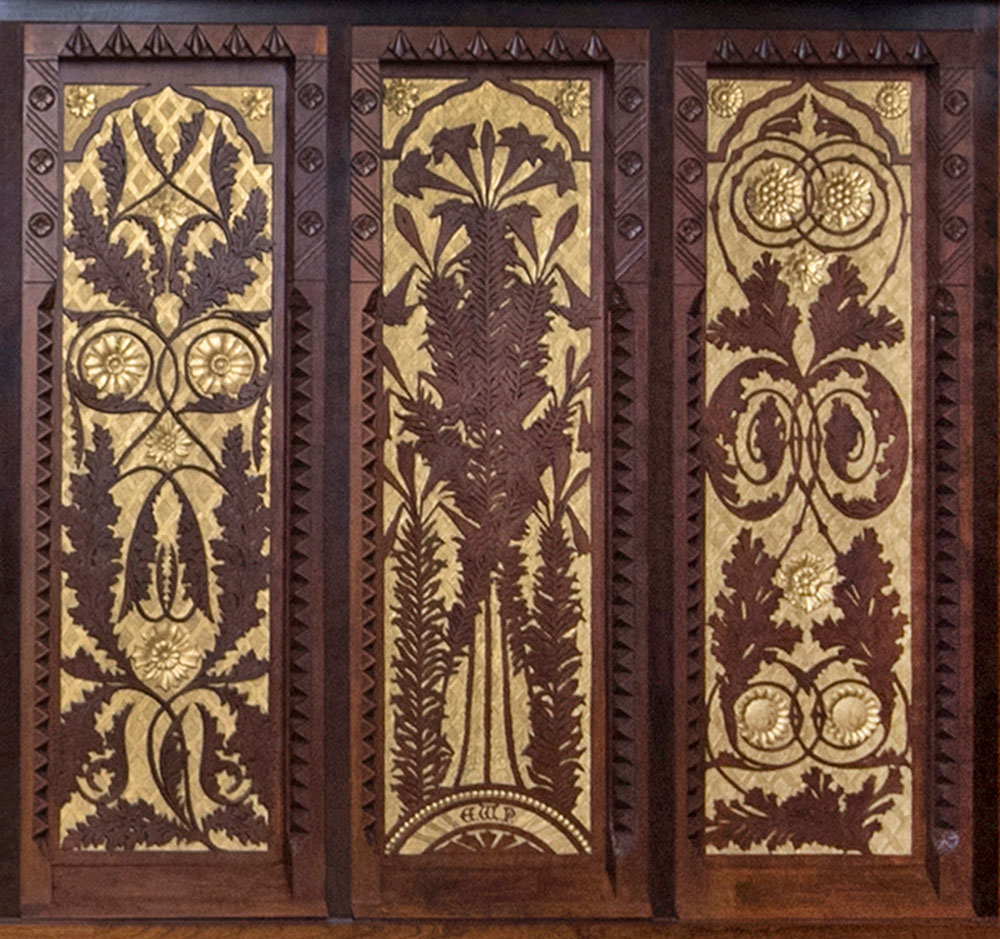 A closer look at the letters "EWP," which indicate the panel was dedicated to Mrs. Aaron (Elizabeth W.) Perry. 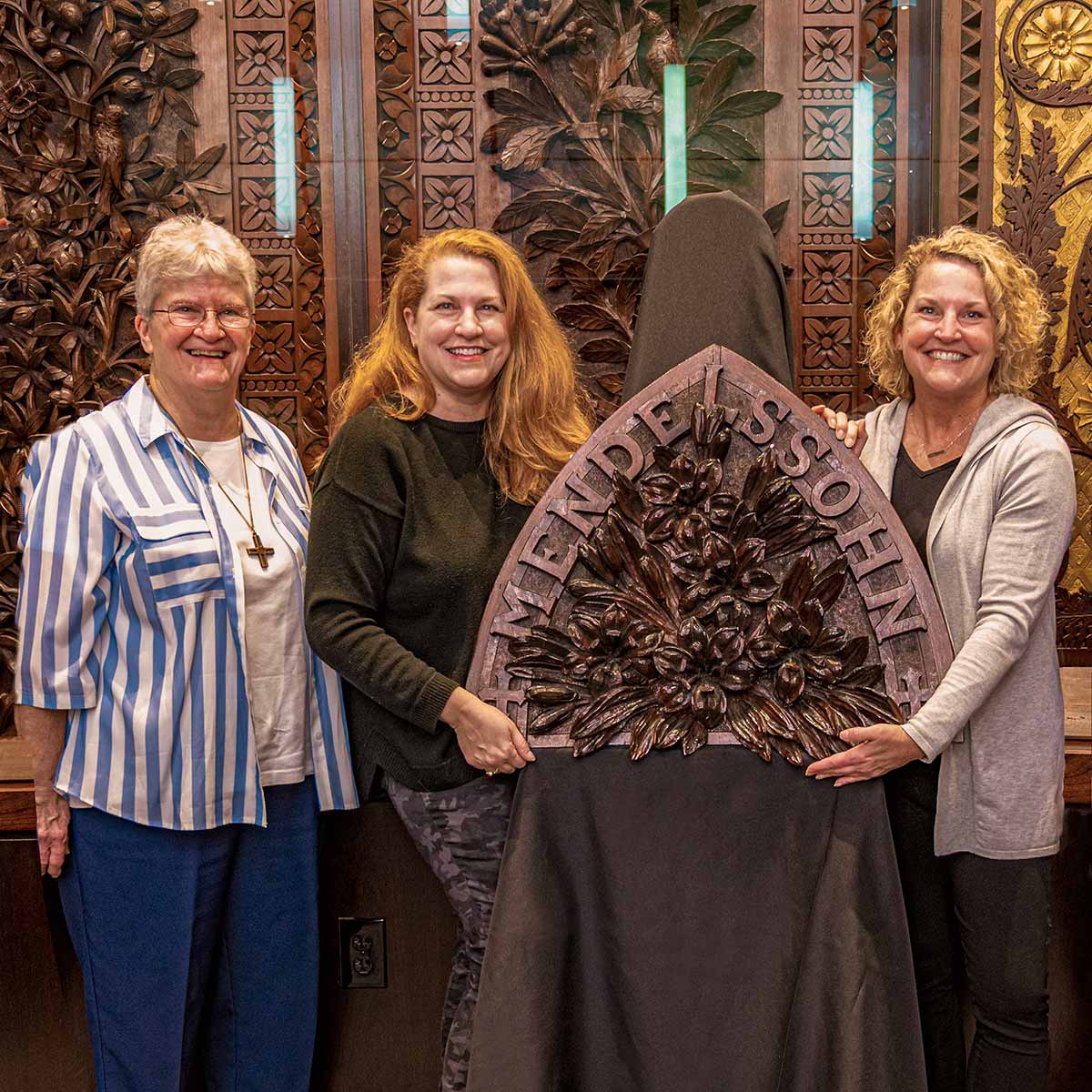