Once the pride of Cincinnati's RKO Albee Theatre, the magnificent sound of the Mighty Wurlitzer Organ once again entertains audiences in Cincinnati!

Through the generosity of a donor who wishes to remain anonymous, coordinated through the efforts of the nonprofit organization Friends of Music Hall, led at the time by Norma Petersen, this remarkable instrument now has a permanent home in the ballroom of historic Music Hall.

The History of this Wurlitzer Organ

The organ was built for Cincinnati's RKO Albee Theatre in a factory in a suburb of Buffalo, New York, and cost $55,000. It was shipped to Cincinnati in late July, 1927, and installed that fall in the newly-constructed theatre, which was on Fifth Street, just east of Vine. The elegant and lavishly decorated Albee opened its doors on Christmas Eve, 1927, with the silent feature (aka photoplay) "Get Your Man," along with performances by a jazz group, dancers, a coloratura soprano, and a comedy dancing duo.

In the early decades of the twentieth century, a theatre organ accompanied the showing of silent films. However, as the Wurlitzer organ was being installed in Cincinnati's Albee Theatre, Hollywood was taking the movies in another direction. The "talkies" had arrived with the October 6, 1927, showing of "The Jazz Singer" in New York's Warners' Theatre.

In 2003, David Klingshirn, founder of the American Classical Music Hall of Fame, was contacted by someone who wanted to fund the rebuilding of the organ. This individual hoped the organ could be installed in Memorial Hall, just south of Music Hall. However, that plan fell through. A proposal surfaced to place the organ in the Music Hall Ballroom, which was believed to be a more suitable location.

The Resurrection of the Mighty Wurlitzer

With an agreement to install the Wurlitzer, and funding in place, Ronald F. Wehmeier started restoration work in 2007.

The "Albee" Mighty Wurlitzer organ now has 31 ranks of 2,000 pipes. The arrangement includes classical ranks which were not part of the original and which expand the organ's repertoire. (A rank is a complete set of pipes, like the violin, the flute, the trumpet, and so on.)

Mr. Wehmeier also added a Steinway Duo-Art Grand 6-foot-6 which he rebuilt and restored. The Steinway was built in 1923-24 in New York. In 1925, the case of the piano was enlarged to accommodate a Duo-Art reproducing player.

The Steinway is playable from the organ console at various pitches. Also, it all comes through the solid-state relay.

See Photos from the Construction & Installation

Organ chambers for all the pipes were constructed on the west side of the ballroom and are somewhat "hidden" behind gold-colored grillwork. The center of the grillwork is from the Albee Theatre. Both the organ and the piano are on moveable platforms placed in front of the ballroom's west stage for performances.

When not in use, the consoles are stored in a spotlighted, glass-doored room at the northwest corner of the ballroom.

Here's a Rundown of the Dedication Concert

The Friends of Music Hall (FMH) make sure the community has ample opportunity to hear the organ. Concerts are held several times a year and FMH brings in the best organists from around the country. Attendance at these concerts is great. In particular Holiday Concert tickets sell out quickly.

Ron Wehmeier is usually in the house for these concerts and enjoys taking theatre organ enthusiasts behind the scenes.

The Wurlitzer Company was founded in Cincinnati in the mid 1800s and originally created a variety of musical instruments. The company's most famous product was the pipe organ, which became known as the "Mighty Wurlitzer" – a designation which became a symbol of quality.

These organs were designed as a "one-man orchestra" and are remembered by many as the "score" or accompaniment to silent movies. 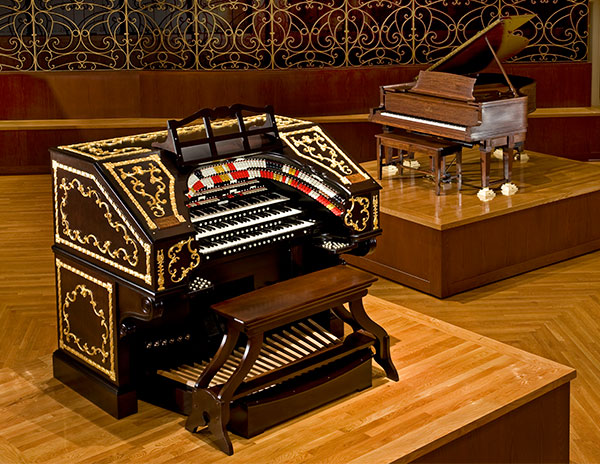 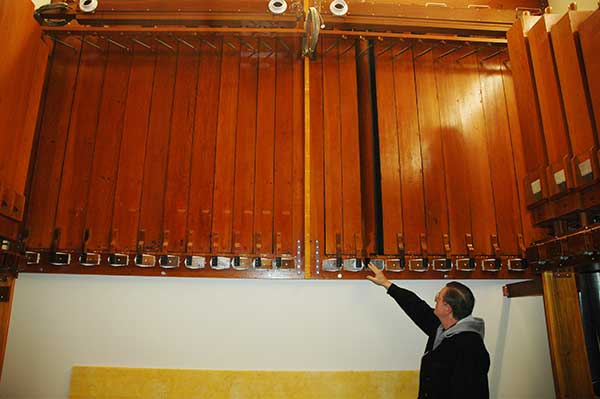 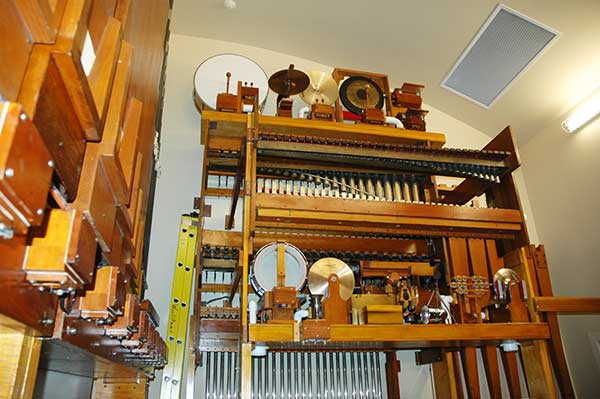 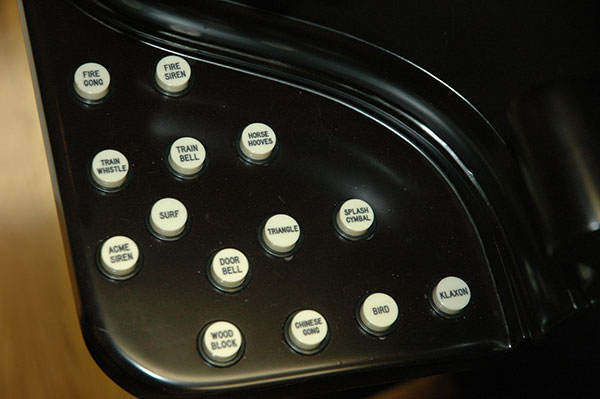 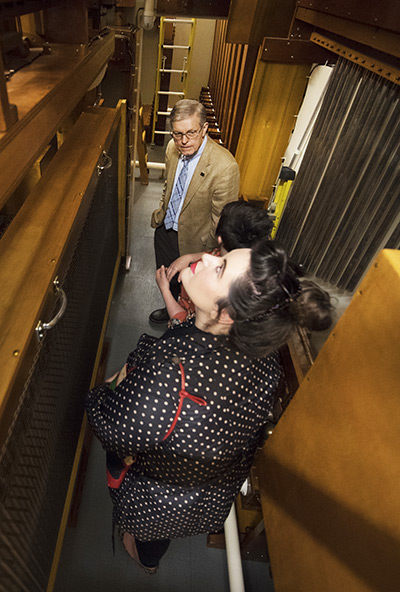 Ron Wehmeier with guests in the organ room