When Cincinnati Music Hall opened in 1878, excitement was heightened by the unveiling of the new Hook & Hastings organ.

This magnificent organ was installed on stage, near where the proscenium is today in the auditorium.

The Cost of the Organ

Reuben Springer had contributed a sizable amount of the total cost of $32,695.00. Members of the community provided the remainder of the funding.

George Ward Nichols, president of the Music Hall Organ Association, summed it up:

Here was a glorious temple within which to enshrine the king of instruments.

The Sound of the Organ

It was truly a monstrous instrument and it had a sound to match. Citizens who could not get tickets to the May Festival are said to have sat outside around Music Hall just to hear the great organ. And a great organ it was! The quote in The Enquirer the next day:

Not an earthquake. 'Twas the organ.

With all the pipes contained in the organ - 6,237 -  you would expect the sound to be powerful.

Oddly. the critic from the Chicago Tribune stated that, despite that expectation, "the full organ is comparatively weak." However, his review included praise for the individual stops and solo effects. He concluded that

a discriminative (sic) organist can produce a great variety of pleasing effects and render it exceedingly attractive.

The organ provided great challenge to anyone who played it. The sound was so slow in coming that, during a fast tempo, the organist needed to anticipate the conductor by nearly a bar of music!

The grand size of the organ provided a golden opportunity for decoration. Area design school students and graduates - mostly women - designed and carved the 121 art-carved panels contained in the organ's casing.

The students were from two schools of design: one run by Benn Pitman; the other belonged to father and son woodcarvers Henry and William Fry.

For a year or two, organ concerts were held rather frequently. Complaints were made that it wasn't used enough. However, People needed to consider the amount of training and skill it took to be able to play it.

In 1901, the organ was overhauled and repairs were made, as needed.

However, in the early 1920s, the great organ was reconstructed by the Austin Organ Company. Of the original unit, only the case remained. While the organ had become an Austin organ, it was still known by its original name..

Still, the sound wasn't up to the quality expected by many music directors, so the organ wasn't used much at all.

By the late 1960s, the organ was in sad shape. Philanthropist J. Ralph Corbett brought in experts from the world-renowned organ firm Harrison and Harrison and other engineers to see if the organ was worth saving. Their estimates ranged from $200,000 to $300,000.

Would Mr. Corbett donate the money necessary to save it? He was already spending millions renovating Music Hall over several years. But he tried to find funders. However, no one stepped forward. After all, the cost of repair far outweighed the cost of a new, more modern organ.

The decision was made to dismantle the Hook & Hastings/Austin organ.

Working parts of the organ were given to church groups. The organ panels were either sold, gifted or stored away. The rest was thrown away.

A Baldwin Multi-Waveform (electric) organ was installed Music Hall in 1974.

The Corbett Foundation financed the purchase and installation and the organ was dedicated by Cincinnati Symphony Orchestra music director Thomas Schippers. 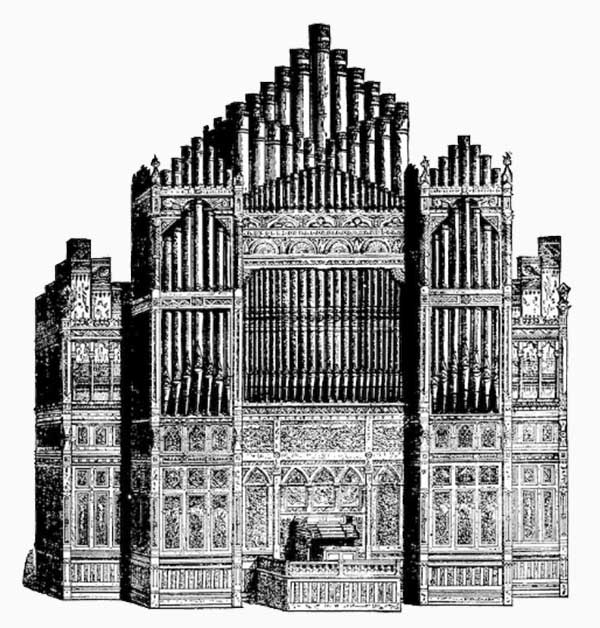 In the quote below, Mr. Springer references houses in the city in the late 1870s, where structures looked like they do now in Over-the-Rhine.

"If our readers passing along the street will look for two houses side by side, each having a front of twenty-five feet, and about three stories in height, they will get an approximate idea of the size of the big organ."