Home » History of Cincinnati Music Hall
In 1875, the second Cincinnati Musical Festival was underway in Exposition Hall. The hall was a large structure used for industrial and business expositions, constructed of wood, had a tin roof, and a dirt floor. Further, while only five years old, it was in disrepair. The evening's performance was composed of extracts from ''Lohengrin.'' However, at one point in the evening, a thunderstorm pelted the city. The thunder shook the city and the sound of the rain on the structure's tin roof was compared to the sound of peas on a drum head! It was so noisy that Music Director Theodore Thomas had to stop the performance.

Legend has it that Cincinnati businessman and community leader Reuben R. Springer was in that audience. As he waited for the musical festival to resume, inspiration struck: Cincinnati should have a proper facility for its world-renowned musical festival!

Whether this is true or not, Mr. Springer took it upon himself to ensure the city had a nicer, more permanent structure. He sent a letter to his friend and colleague John Shillito. In it, Springer proposed a music hall and laid out specifications he deemed important for building it. Download a transcript of Springer's letter “Some views about a Musical Hall building.” Cincinnati has a classical chorus, a first-rate orchestra and a budding reputation as one of the arts capitals of the world. It is only fitting we also have a musical hall.
Within a few days of the festival's close, Mr. Springer sent the letter to his colleagues. His missive laid out a plan for this hall.  Cincinnati Music Hall, an elegant 140+ years-old building, stands majestically at the corner of 14th and Elm - just a short walk from the city's center. See a timeline of key events in the history of Cincinnati Music Hall.

Three Buildings or One?

Music Hall was originally designed for unique and dual purposes - to house musical activities in a center area and industrial exhibitions in its side wings. Mr. Springer donated one-hundred twenty-five thousand dollars toward the construction of Music Hall. His generosity carried the condition that people in the community raise an equal amount - a one-to-one match. The central portion was built in one year and dedicated at the time of the third May Musical Festival in 1878. As the central portion was being planned and the decrepit Exposition Hall torn down, business and manufacturing interests protested, arguing that they no longer would have a place for their popular exhibitions. Reuben Springer was a businessman himself and he understood their objections. In a letter to the Citizens of Cincinnati, he explained:
...from the first, the Industrial Exposition always had a prominent place, and the intention was never lost sight of, in the construction of the hall, to adapt it for Exposition purposes, as well as for music and other great public needs.
He initiated another challenge: if one hundred thousand dollars could be raised for construction of the wings, he would write a check for 50 thousand dollars. Again the citizens of Cincinnati rose to the challenge. The north and south wings were added and opened in the fall of 1879. Read more about the layout of Music Hall.

A review of the competing designs from outstanding architectural companies - both local and national - was held. The local firm of Hannaford and Procter was chosen. Samuel Hannaford was the head of the most prolific and probably most successful architectural firm in Cincinnati, from before the Civil War until he retired in 1900. The Hannaford architectural dynasty continued under the leadership of his son and others until the 1960s.

Hannaford designed the structure in the style of High Victorian Gothic. The architectural style is seen in various design elements in the structure. The façade of the structure includes sandstone designs that speak to the purpose of each of the three sections:
A passageway for carriages separated each building so wealthier patrons could enter the hall protected from the elements. The length of the building on Elm Street is 372 feet; the depth from front to rear is 293 feet and the highest point is the pinnacle of the front gable 150 feet above the sidewalk. It covers an area of 2-1/2 acres.

Patrons have always promenaded through the foyer or vestibule during intermissions of various events, marveling at the original red slate and white marble floor. Today, first floor hallways also serve as galleries honoring contributors, individuals and significant events in the life of Music Hall.

Music Hall is best known for its central portion: the elegant and acoustically-acclaimed Springer Auditorium where Cincinnati's Symphony Orchestra, May Festival, Opera, and Ballet companies and other productions hold performances.

Originally, the auditorium had far less rake and seated nearly 6,000 people, including orchestra and chorus on stage. Over the years, the auditorium's size has been reduced, both to extend the stage and to accommodate more comfortable seats and improve accessibility.

Arthur Thomas, in 1905, created the oil painting in the domed center of the ceiling. Figures in ''Allegory of the Arts'' are Muses representing music, science, history, and dance, as well as comedy, tragedy, love and epic poetry and hymns

A dramatic chandelier of brass and thousands of hand-cut crystals hangs from the center of the dome. The piece glistens and seems light and airy but actually weighs 1,500 pounds. This and the three smaller chandeliers in the foyer were part of the 1969 renovation. The foyer chandeliers were moved to Corbett Tower during the 2017 revitalization..

When first built, Music Hall's "stage" was a platform that held the singers and orchestra. Visiting opera and theatre troupes needed to create their own proscenium, curtain and wings.

The Music Hall Association saw an opportunity to draw additional performances and added a proscenium and thrust stage in a redesign of the center building in 1895.

Renovations, remodeling and "revitalizations" over the years have improved the stage area, added an orchestra pit and brought the stage more into the audience area.

Music Hall now possesses one of the largest and best-equipped stages in the world. A 90-ton steel grid framework is used to suspend scenery and lighting. It rests on the original foundations of the 1844 Orphan Asylum, one of the early occupants of the site.

A charming reception room above the foyer was originally built in 1878. This area of the structure was known as Dexter Hall, named for Julius Dexter, a civic leader and chair of the Music Hall building committee.

It is now Corbett Tower, named for long-time arts and Music Hall patrons and philanthropists J. Ralph and Patricia Corbett.

Corbett Tower was recently refurbished. A drop ceiling added in the 1960s to accommodate air conditioning was removed, and the room gained an extra 17 feet of height. In addition, this action exposed a cove ceiling and elegant stenciling, which has been faithfully reproduced.

When built, this wing was known as Mechanical Hall. The large building featured two levels to accommodate the machinery shown in expositions.

In the 1920s, when the popularity of expositions waned, the north wing was renovated and a six-thousand-seat sports arena was installed. The space was quite versatile and for exhibitions could still be used for exhibits and displays. Throughout the years, the arena was used for a wide variety of sports:

In the early 70s, as sporting events moved to other venues, the wing was refurbished to accommodate set construction, painting and storage.

The southern portion of this 3-building structure was known as Horticulture Hall. When it was built, this wing featured two levels with a glass roof and accommodated exhibits ranging from plants and landscape displays to art exhibits.

The 1927 renovation provided a full roof for south hall, and the second floor became a ballroom - a popular spot for bands and dancing.

Today, the first floor holds the offices of the Cincinnati Symphony Orchestra, Cincinnati Pops, and May Festival. The ballroom remains on the second floor, and the restored Albee Mighty Wurlitzer Organ "lives" in a special room on the west side of the ballroom. One half floor up - on the same level as the auditorium's balcony, is the office of the Friends of Music Hall. 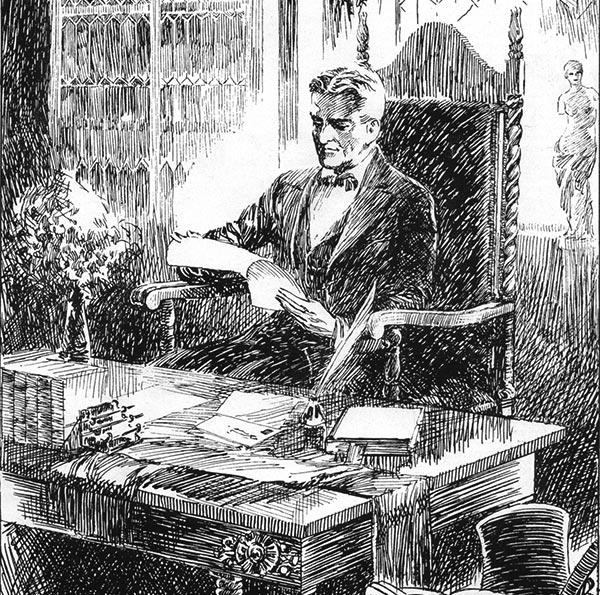 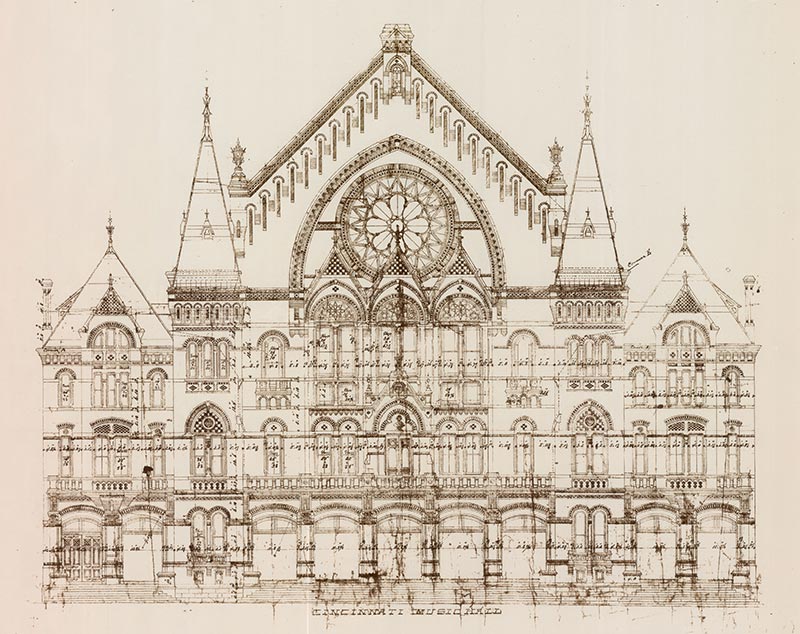 All Who Contributed to Music Hall

Reuben Springer's contribution to the construction of Music Hall was contingent on citizens contributing as they could. In a speech at the Dedication, Springer's generosity was acknowledged, as were the contributions of "average" individuals including a "colored barber." Who was this barber, and why was his donation noteworthy? His story was uncovered by historian/preservationist Thea Tjepkema and you can read it here, in our Blog about "The Venerable Barber Who Helped Build Cincinnati Music Hall."

Thea Tjepkema is Music Hall's Guardian Angel. What drives her to help preserve our Temple of the Arts? Read Cincinnati Magazine's profile of Tjepkema, written by Polk Laffoon IV. 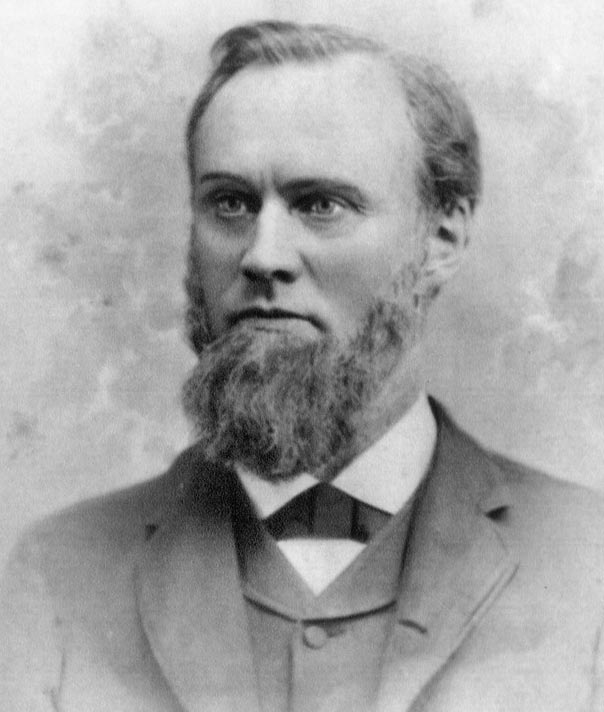 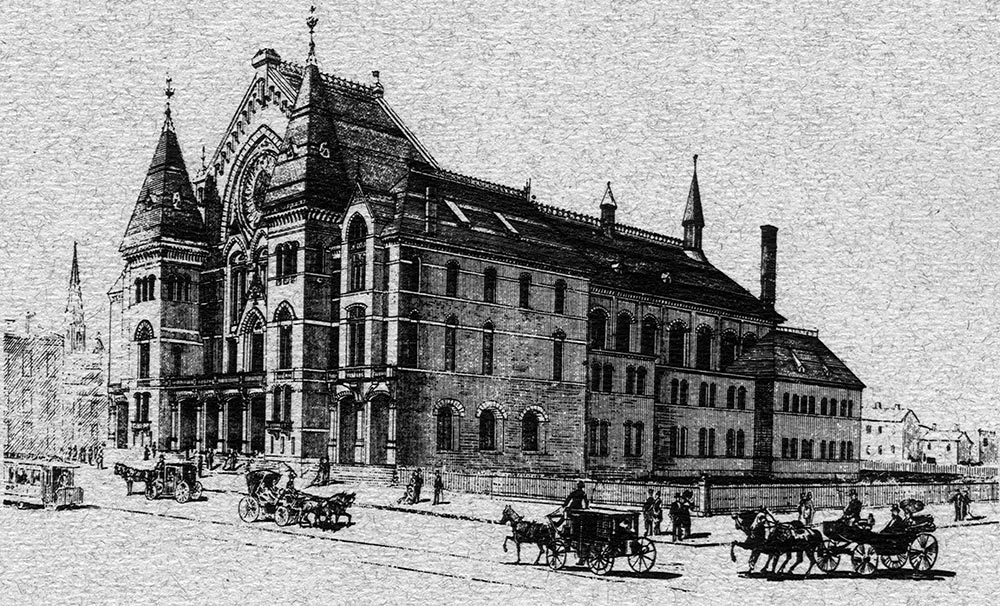 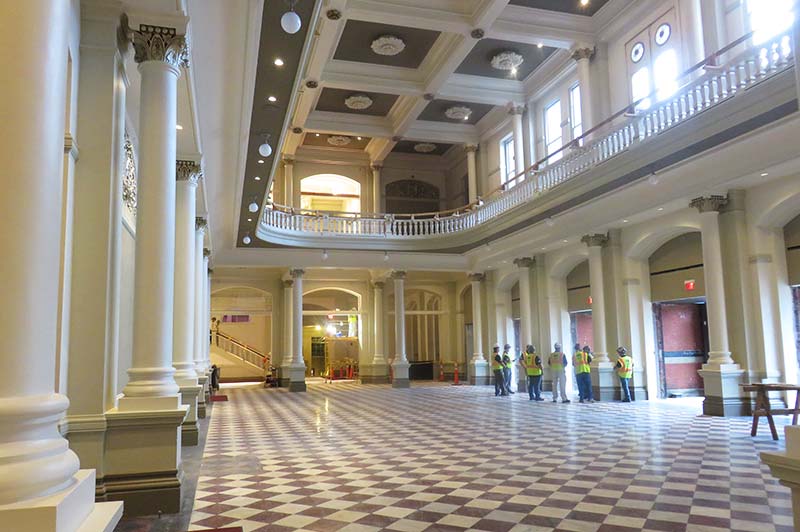 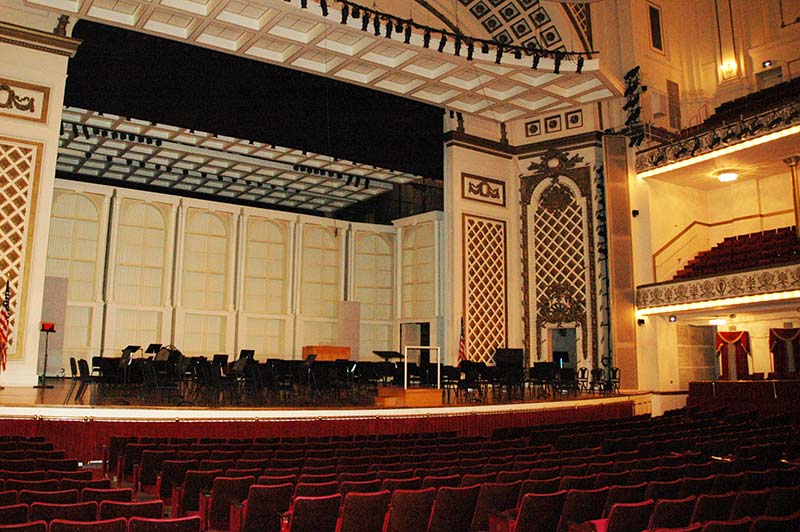 Springer Auditorium, before the 2016-17 renovation 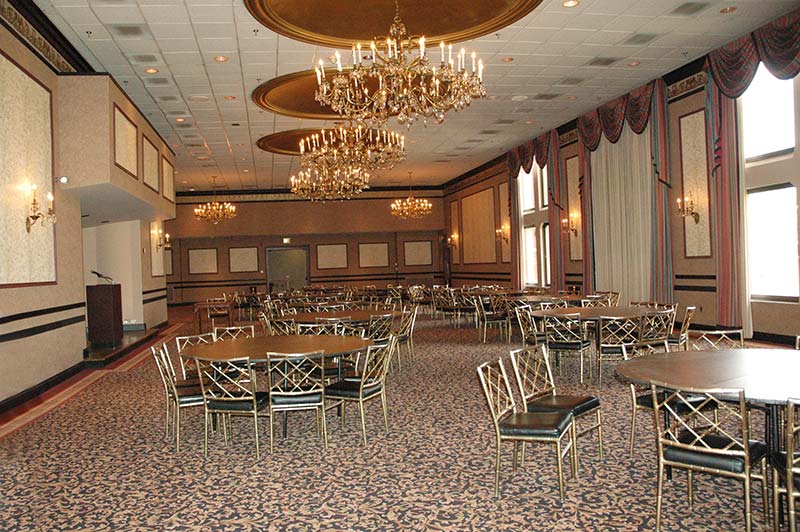 Corbett Tower in 2015, before being restored 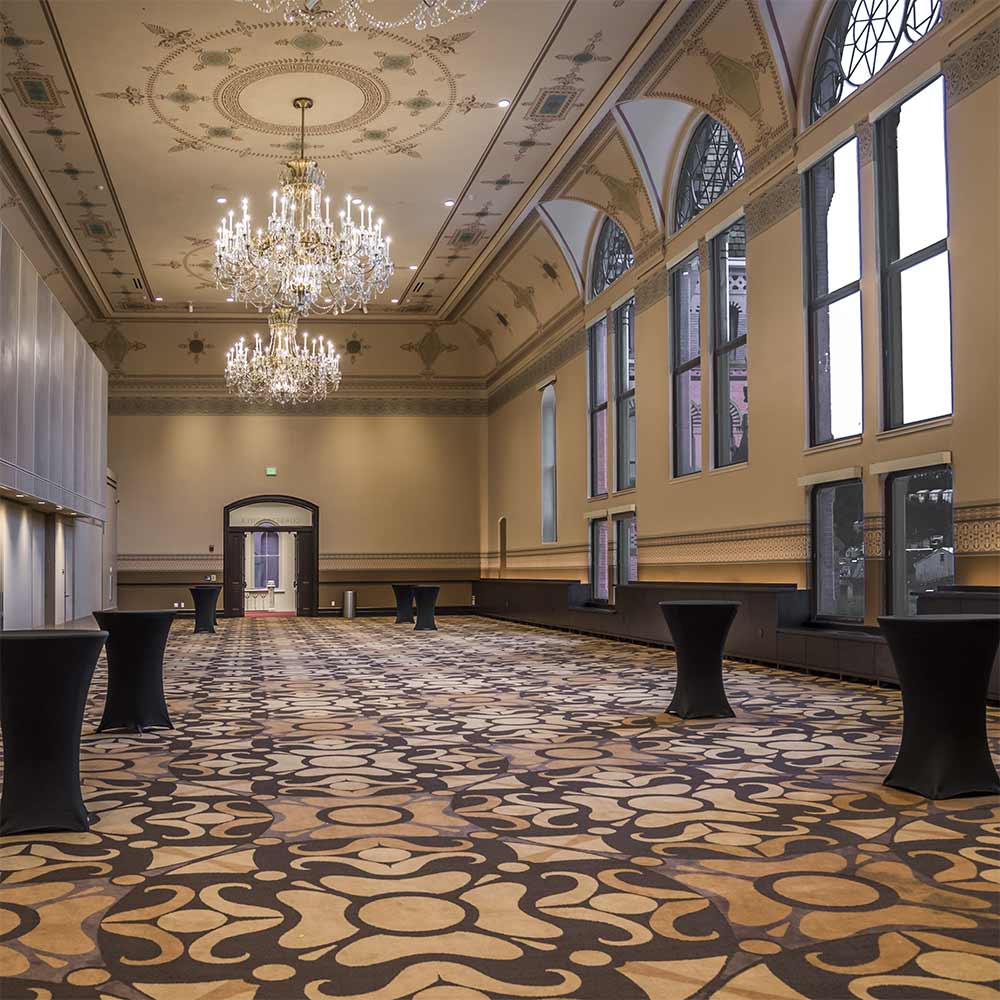 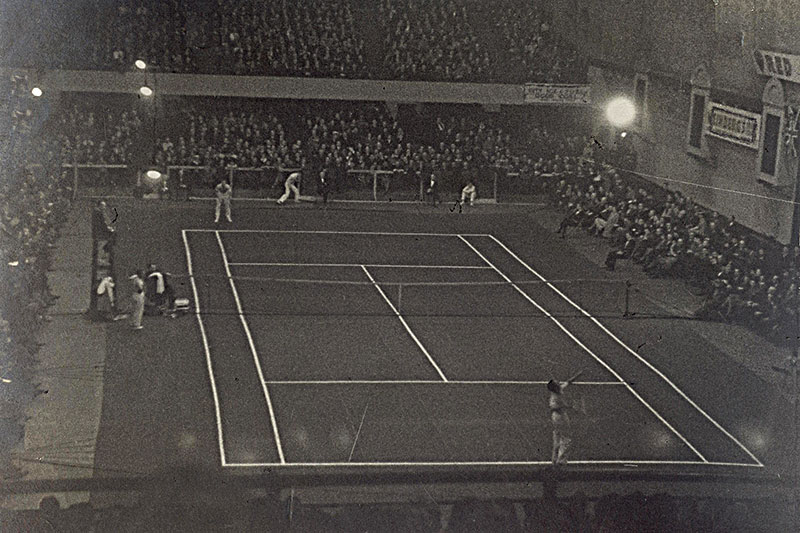 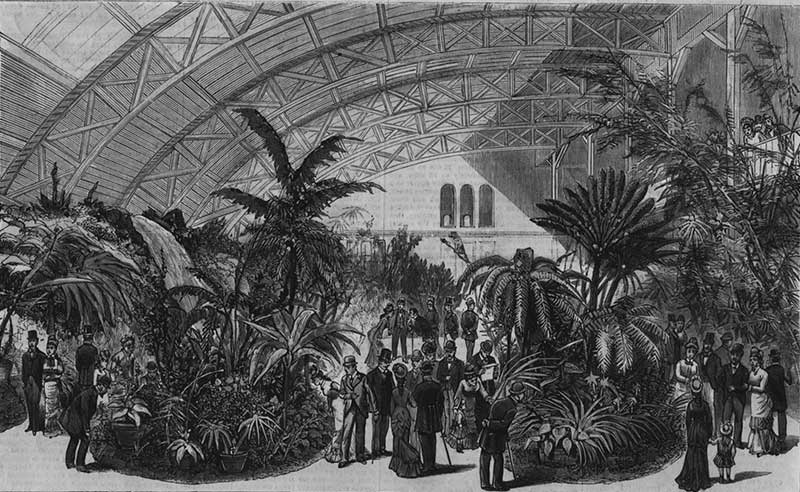 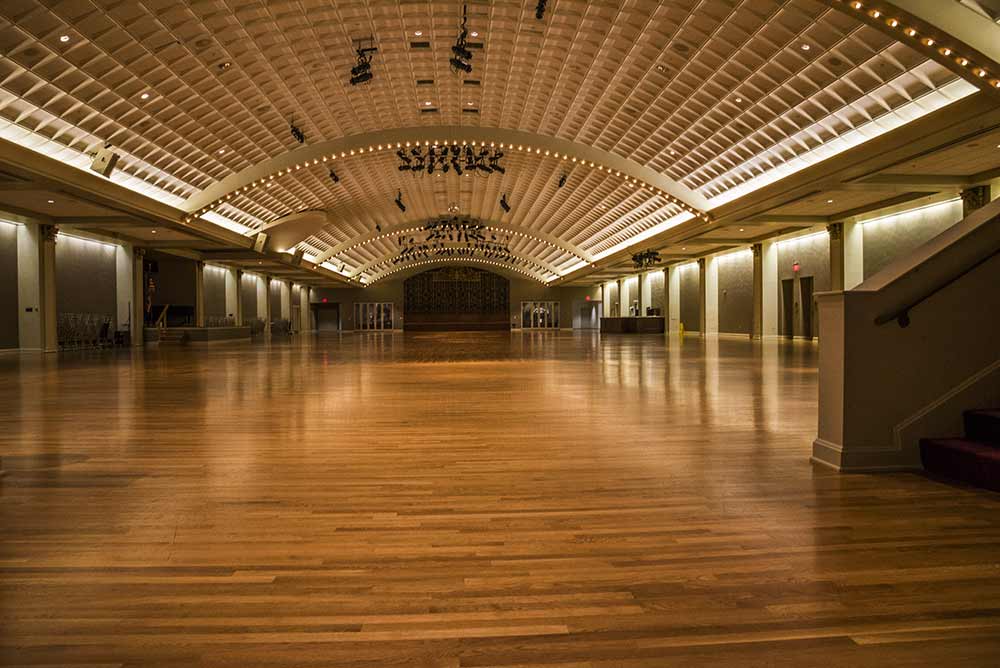