Expositions in Cincinnati and at Music Hall

In fact Reuben R. Springer, the man credited with the idea of a "musical hall," had stated as much in a letter that kicked off the enterprise in 1875:

The Musical Hall building to be located in the center of the lot, and so planned and constructed as to be capable of being used for exposition purposes in connection with suitable buildings that may be constructed on the north and south to the limits of the lot.

As a successful businessman, Mr. Springer knew that expositions were successful on many levels. First, they give manufacturers and retailers a way to show off goods and services and make sales. Equally important, expositions were a form of entertainment—people came from miles around to spend the day, or more, at an exposition.

Well, the mere public announcement of the construction of a new Music Hall, to be erected where the old exposition building was standing, created quite both excitement and controversy in the city.

Jealousies arose between those who favored the popular music festivals and those who felt the future of the city was best served by more and greater exposition space.

The newspapers, of course, had a field day! Moreover, letters appeared in the papers, each more bitter and caustic than the next. In one, a citizen wrote that "We are a mechanical people, not a race of fiddlers."

It looked for a while that the internal strife would seriously harm the city.

Mr. Springer stepped in and acknowledged the beliefs and feelings of both groups. He then offered $50,000 towards the construction of buildings around Music Hall for industrial expositions. Springer's offer came with a provision. Other citizens needed to come up with $100,000 more. This was the same "deal" he had made to stimulate the construction of Music Hall.

The First Exposition in Cincinnati - and the Nation

1838. May 30, to be exact. That was the date the first annual Fair of the Ohio Mechanics Institute was staged in Cincinnati. Actually, that was the first exposition ever held in the United States. Further, it was in the nation's first permanent exhibition hall.

The Ohio Mechanics Institute was founded in 1828 to provide education and training for mechanics, a skilled-labor term that, at the time, encompassed blacksmiths, bricklayers, carpenters and others.

OMI's 1838 "Exhibit of Arts and Manufactures" drew citizens from far and wide to look at industrial products. Maria Curro Kreppel, Professor Emerita of English and Communication, U.C.'s College of Applied Science, studied the history of OMI. She indicates these fairs were started because "the OMI directors were looking for ways to get more public attention to math and science and industrial topics."

Eighteen of the fairs were held before the Civil War. Then, after the war, OMI joined with the Chamber of Commerce and the new Board of Trade to hold expositions. Their goal was to try to jump-start an economy that was hard hit by the war.

So, 1870, they held the first of the Grand Industrial Expositions, in Sængerfest Halle, at 14th and Elm.

In an interview for the documentary Music Hall: Cincinnati Finds Its Voice, Dr. Kreppel described the expositions:

And they were also talking about halls full of machine tools, early machine tools, lots of steam engines. And all sorts of new pieces of equipment. This was the time of great growth in the American patent office and the spirit of invention was everywhere. And that was quite at the center of the Grand Expositions.

The Grand Expositions lasted 30 days and drew tens of thousands of people from the entire Midwest region.

Can you picture these folks slogging down the canal? No buses. No public transportation to speak of. It must have been pretty messy just getting there. But they came to see seven acres of machinery in motion and they left $100,000 plus in the city coffers.

In that era, Exposition buildings were hastily erected and featured a dirt floor. So by 1875, when discussions began about building Music Hall, the OMI directors were looking for a nice, permanent building in which to hold these expositions.

Despite the initial controversy, Reuben Springer brought together the interests of the city fathers, the mechanics and others to get the north and south wings built in time for the 1879 Industrial Exhibition.

However, because of the size of these Grand Expositions, Music Hall and its wings wasn't the only structure used. Whole buildings were constructed just for these expositions, with the structure sold off or torn down after it closed.

The Great Centennial Exposition of 1888

The last of the Great Centennial Expositions ran longer than previous expos - from July 4 until November 8. This Expo was intended to showcase the entire region and celebrate the centennial of the Ohio Valley. It was called the "Centennial" Exposition because Cincinnati was founded in 1788. And it was huge.

The Main Exhibition Hall was in Washington Park and was connected to Music Hall by a covered bridge. The Main Hall was built in the shape of a cross, the long end extended 600 feet while the shorter "cross" section measured 400 feet. Each section was 110-feet wide and two stories high. And there were annexes to this building!

Contained within that structure were the Industrial Display, an expansive display for the U.S. Government, exhibits of furniture, a restaurant, cafe, offices for various committees, a hospital, police and fire offices, telegraph and telephone offices, and a room for reporters, among other things.

Then, "behind" Music Hall a massive, three-block building was constructed, extended from Twelfth to Fifteenth Street.

In all, the Exposition covered fifteen acres and featured over 1,000 different exhibits.

Visitors were treated to:

Expositions Were not all Business

In addition to exhibits, there was a variety of entertainment ranging from performances—organ, orchestral, recitals, and dramas—to parades and fireworks.

Among the wonders, for example, in one of the horticultural areas, you could see the beautiful flower displays interspersed with flowers made of electric light bulbs that were variously turned off and on.

Thomas Edison's company created an amazing display of one huge incandescent bulb. It was 30 feet high, using 150,000 light bulbs to create it. This provided a new opportunity for visitors, too, because, with electric lights, they could view the grand outdoor exhibits at night.

Above all, however, outside connecting the cruciform building in Washington Park, the Music Hall complex and this three block long Machinery Hall built over the canal where all the machine tools were located, connecting all of that was outdoor electric lighting for the first time ever at one of these exhibits.

The most popular feature of all: gondolas imported from Venice, Italy. The gondoliers entertained as they carried expo visitors along the canal, through the Mechanical building.

However, this grant affair lost money, and was the last of the great expositions for many years.

Read the Official Guide of the 1888 Centennial Exposition of the Ohio Valley and Central States.

The Greater Cincinnati Industrial Exposition was held October 3-14, 1928. There were many exhibits throughout the structure, including Art, Musical, Photographic and Stamp Exhibits, as well as a military display and exhibits by the Ohio Mechanics' Institute.

The Expo also featured entertainment and performances, and what was billed as "the greatest historical Cincinnati exhibit ever viewed."

Conventions and Exhibitions Throughout the Years

Major renovations were made to Music Hall in 1927. The North Wing, which had been known as "Industrial" or "Power" hall, was converted into an arena for sporting events. The South Hall continued to be used for a variety of exhibitions, often in conjunction with the lobby and auditorium. The biggest shows expanded into the north hall and into the auditorium.

One notable event was the Democratic National Convention, held in Music Hall in 1880.

Another example: The Automobile Club of Cincinnati held its first automobile show at Music Hall in 1910. ''Motor cars'' were often sold on the spot to buyers who traveled hundreds of miles to attend the program. Manufacturers used the auto expos to introduce new models to consumers.

Annual expos included the "Home Beautiful" show, started in 1925 by the Cincinnati Real Estate Board. This expo featured construction of a model home inside Music Hall's north wing. A new home was designed and built inside the hall each year through 1935. Each house was dismantled following the show and the materials moved to a lot in Greater Cincinnati, where they were then re-constructed. Many of these houses are still occupied today.

In short, Music Hall served as the city's permanent convention and exhibition center. 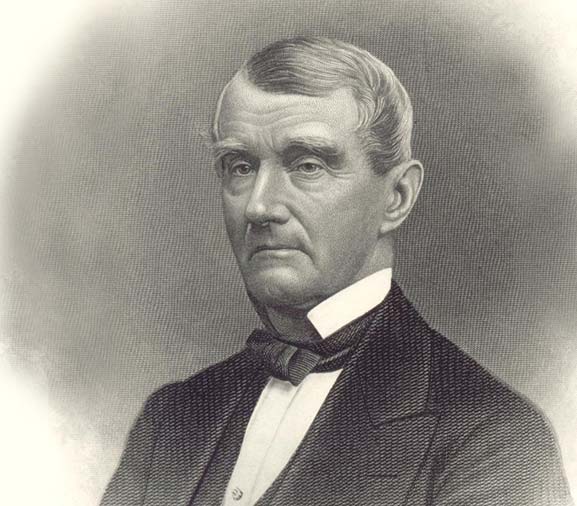 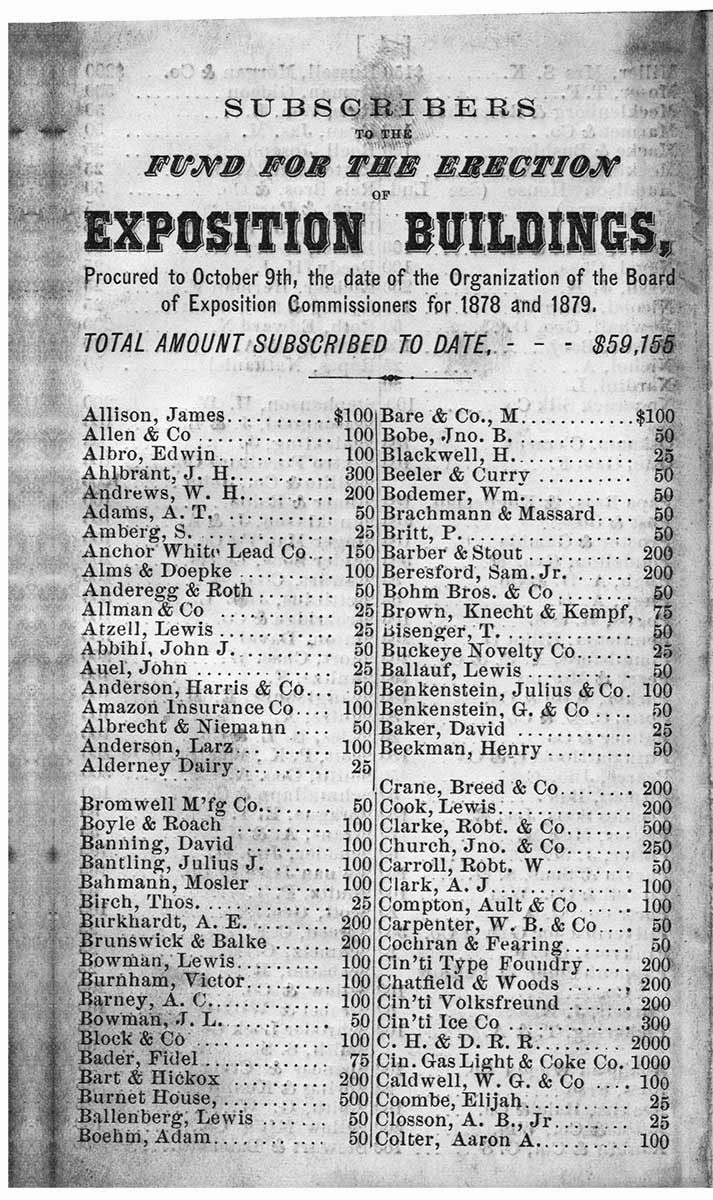 Subscribers for the Exposition Buildings 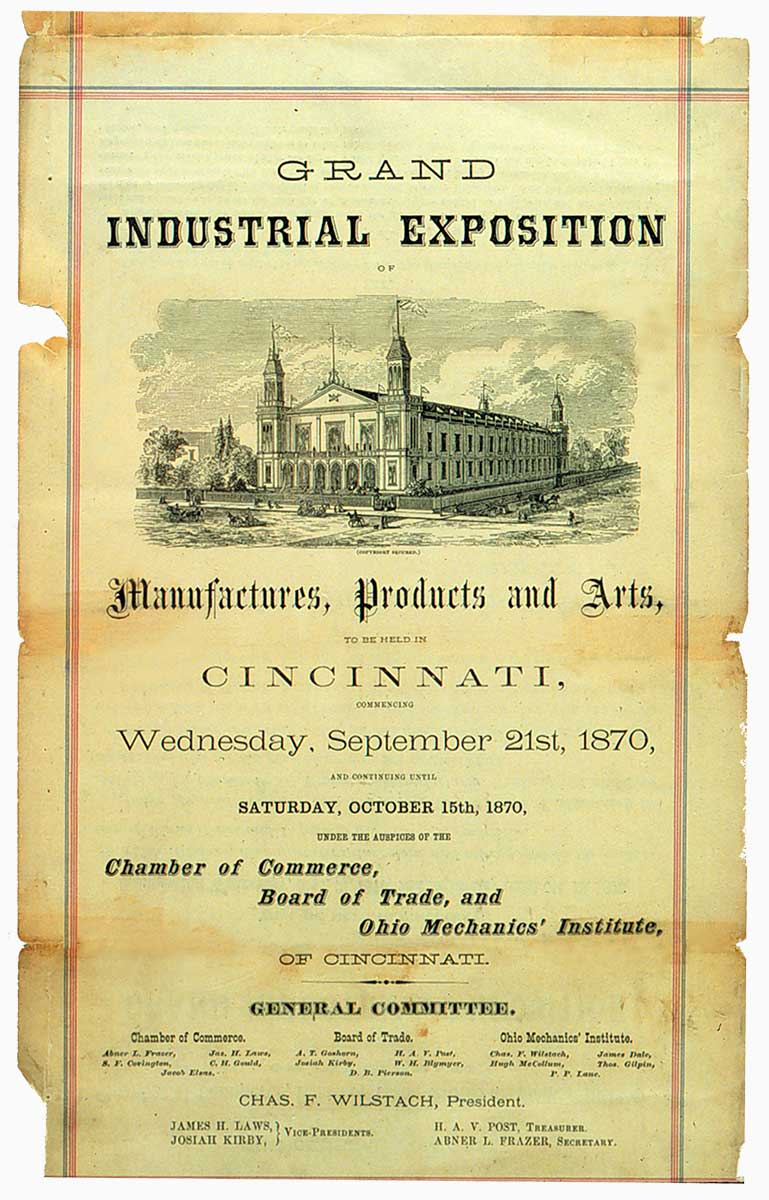 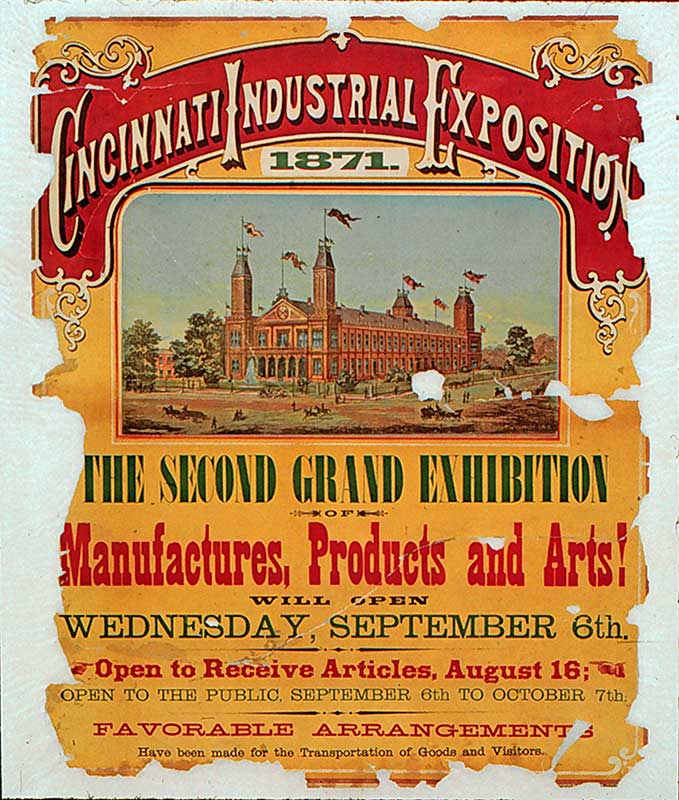 A Scary Encounter in Music Hall

In the early years, Expositions featured all kinds of, well, exhibits. Sometimes ''things'' are unknowingly left behind! 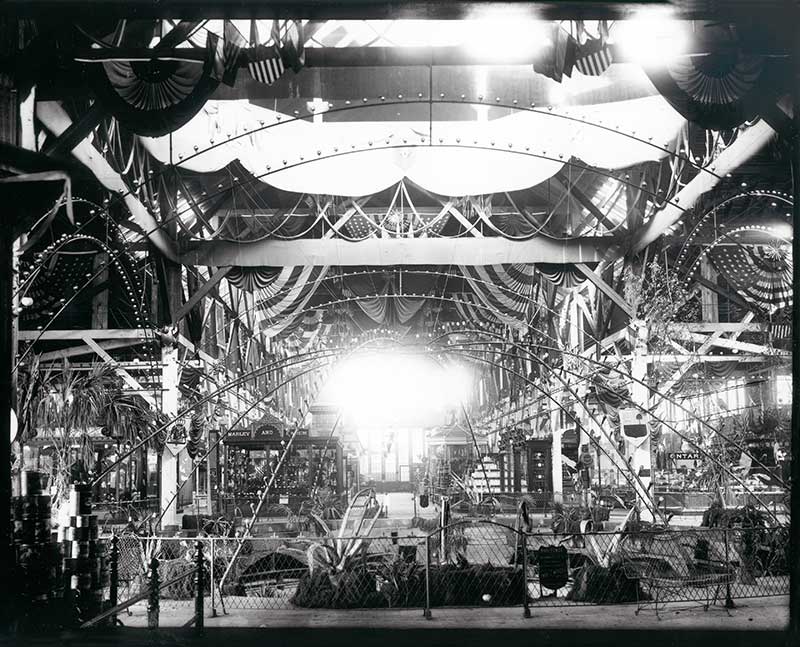 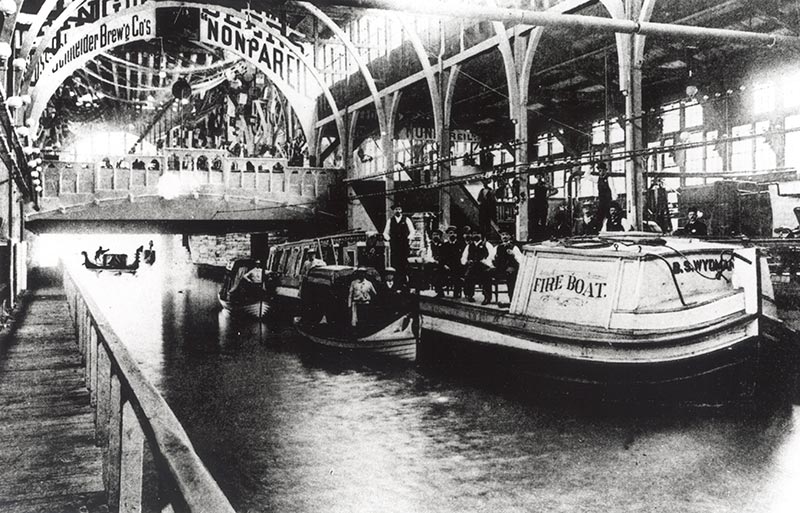 * Ajebb, identified by the press as a chess automaton, took on – and beat – anyone who chanced to challenge him.
* Brewers Day featured tub races, swimming, and a greased pole walking contest – those who failed fell into the canal. Thereafter, tub and swimming races were held each Saturday.
* An exhibit of the Ohio Penitentiary included an exact model of the execution room in which the condemned were hanged, along with photos of a few of the prisoners who were executed.
* Despite the incredible variety of exhibits in the 1888 Exposition, newspaper reporters favorably mentioned the Foss-Schneider Beer Hall in every edition during the entire run of the expo.
* And In August, it was reported that someone who came in from the country to see the exposition checked her baby in the check room in Music Hall. Apparently, this was okay with the attendants and the baby is said to have slept all afternoon. 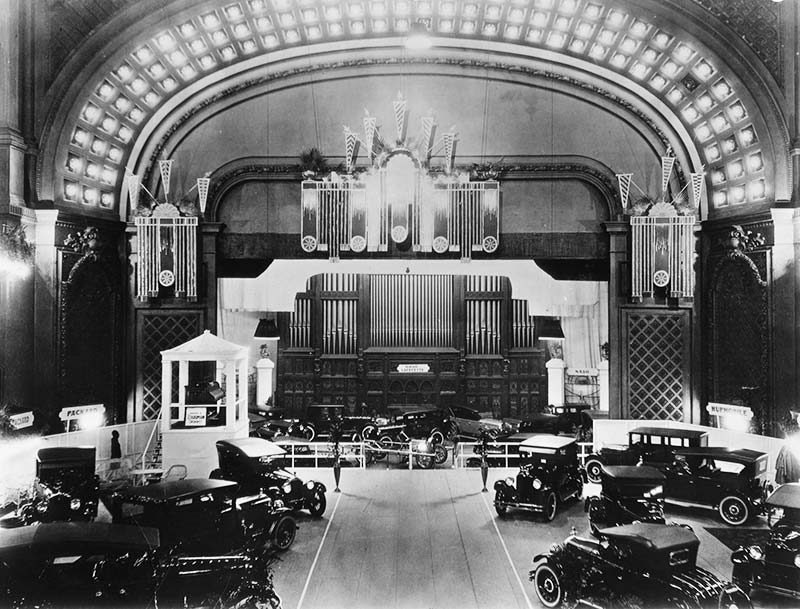 Was Your Home A Model Built Inside Music Hall?

The annual Home Beautiful Expositions (1925-1936) had many exhibits and some unique features. See photos of Model Homes, both inside the north wing of Music Hall, and where they are in Cincinnati today.