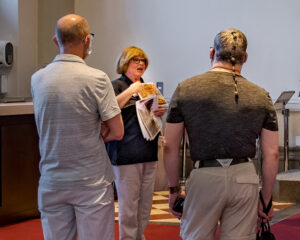 For 35 years, Gayley’s primary career was as a High School and Middle School Orchestra Director, but “Tour Guide” runs a close second. Gayley has been showing Music Hall and sharing her knowledge of the structure with guests for over twenty years. She volunteered first with the CSO in their education department, and is now with FMH.

Originally from California, Gayley came to Cincinnati as a Corbett Scholar to attend the College-Conservatory of Music on cello. She first studied Performance, but switched to Music Education for her junior and senior years. Her teaching career included the Forest Hills and Northwest Districts. She also taught music education classes at Xavier and Miami Universities.

Since retirement, Gayley plays cello and viola in the West Chester Community Orchestra and  teaches privately. Her volunteer work centers on music education. She volunteers in local schools coaching string students, has served over two decades on the boards of the Ohio Music Education Association (OMEA) and the Ohio String Teachers Association. She is an adjudicator for the OMEA String and Orchestra events. Gayley also co-authored a three-level supplemental string method (for all stringed instruments) titled: “Developing Virtuosity,” and has composed and published string orchestra pieces.

While it seems like music rules Gayley’s life, she has shared many wonderful life experiences with her husband, their adult son and daughter, and their four grandchildren.  She considers herself lucky to have her family here in Cincinnati where she continues to learn about the history of Cincinnati and the role of Music Hall in it.