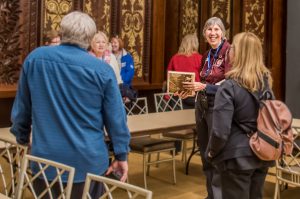 Music Hall and our organization Friends of Music Hall are a big part of Carol Kruse’s life! She’s been a member and supporter almost from the time the organization incorporated as The Society for the Preservation of Music Hall/SPMH. Carol has been giving tours since 2009. How much does she love Music Hall! When Carol lived in Melbourne, Australia, she hung a watercolor painting of the structure on the wall of her flat!

In her volunteer work as a Program Guide, Carol loves to share her passion for Music Hall with others.

I hope that they will love it as much as I do and come to performances there as well!

When you attend performances, you likely will see Carol. She has subscriptions for all the resident companies – the Symphony, Pops, May Festival, Opera and Ballet.

Along with her volunteer work for Friends of Music Hall, Carol has just completed 6 years on the board of the Three Arts Scholarship Fund. This organization awards scholarships to female college students majoring in music, musical theater/drama and visual arts.

Carol Kruse not only leads tours on to the stage – she also performs! She is a member of a number of area choruses including Voices of the Commonwealth, One Voice (singing at retirement and nursing homes), Westchester Chorale, and October Festival Chorus. And she’s been treasurer of her church for the last 22 years.

When not singing or leading tours, Carol can be found birding in area parks and nature reserves. Her sports interests extend to University of Cincinnati football and basketball games. Carol also enjoys traveling, not only in the U.S. but also to faraway places. She has set foot on all 7 continents, including Antarctica.