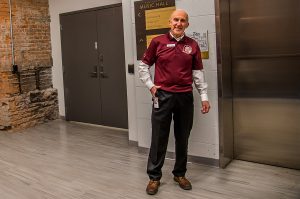 Friends of Music Hall (formerly SPMH) was also working hard, recruiting volunteers to be trained and serve as Program or Tour Guides when the structure reopened.

In July, Alan and Mary Bunker applied as volunteers.

Alan had attended the World Choir Games in Music Hall’s large, impressive auditorium in 2012. He and Mary had taken a tour before renovation began and, as she loved the historic structure and wanted to volunteer, Mary encouraged Alan to apply because she thought it would be fun for them to volunteer together.

On indoor tours, Alan’s favorite area of Music Hall is the Taft Suite, where the hand-carved organ panels can be viewed. Most people have never seen or heard of the great Hook & Hastings organ or the panels that covered it. In this video, Alan describes the origin of the panels, how they were created, and what he enjoys about this part of his tour.

In addition to leading tours, Alan volunteers for the Downtown Residents’ Council and for Cincinnati Parks.