Cirque de la Symphonie is at Music Hall this weekend. Talented aerialists moving gracefully over the heads of Cincinnati Pops musicians on stage. The Cirque performers and the Pops musicians are synchronized, much like a ballet.

There was a time when other aerialists performed in Music Hall. Not with the Pops or CSO, but as part of a circus,  where the stage and auditorium replaced the big top!

Going to the Circus in the mid 1800s in Cincinnati

Adults and children had their pick of circuses performing in Cincinnati. In those days, a circus set up shop in any of a number of large open spaces, like in Cumminsville and Norwood.

Others, like the John Robinson circus, set up tents on lots in or closer to the city, including what was called the Asylum lot at 14th and Elm – where Music Hall now stands – and in Lincoln Park in the West End.

These circuses were held when the weather was warm.

Animals on the Music Hall Stage

The 1922 circus wasn’t the first time animals and a three-ring atmosphere filled “The People’s Temple.” In 1900, the Elks held their annual meeting in Music Hall. For the entertainment portion, they spoofed a circus. Reports indicate they borrowed some animals from the Cincinnati Zoo. But the elephants were members of the Elks who appeared in costume.

In 1922 the first real indoor circus was held in Music Hall.

This feat was made possible by the Syrian Temple, Ancient Arabic Order Nobles of the Mystic Shrine. And like everything the Shriners present, this circus was first class all the way. They hired the best professionals from Barnum & Bailey, Ringling Brothers and others. They included: 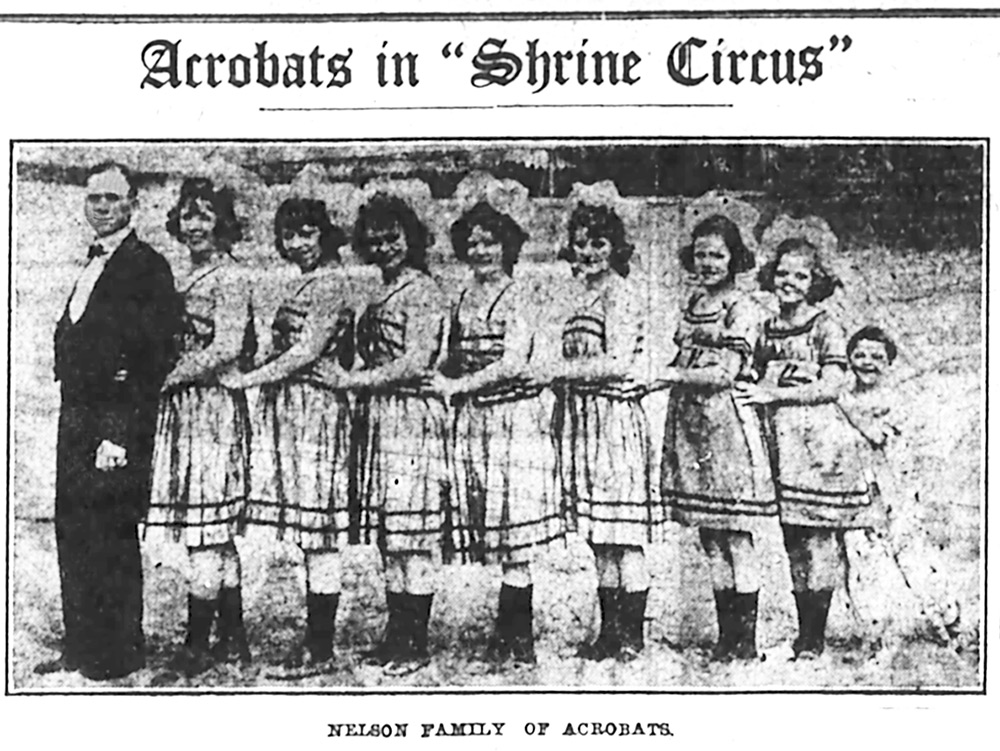 While all the events thrilled the audience, one in particular upped the excitement level. A Japanese wire walker made his way up a tight rope, which extended from the orchestra, over the audience and up to the gallery/second balcony! He then slid back down the rope, gracefully hopping off in an aisle near the stage.

Heading the list of attractions for the Music Hall stage was John G. Robinson’s Military Elephants. They staged a miniature battle and fired cannons. The elephants then formed a hospital corps to care for those wounded in the staged fight.

The Robinson’s most famous pachyderm was “Tillie,” said to be the oldest elephant in captivity. She was billed to be 105 – although later her age was set at roughly half that – and her other claim to fame was that she could say “Papa.” For two afternoons following matinees, Tillie held a reception for children on the Music hall stage. They could not only meet Tillie but also feed her peanuts.

Tillie was quite famous, performing at children’s hospitals and homes for the aged. She also helped raise money during government bond drives. Legend has it that after Tillie died in 1932, she was buried in Terrace Park.

The Shrine Circus at Music Hall

The Shriners ensured that the entire circus atmosphere was authentic. They provided for side shows, as well as the usual circus concessions of popcorn, peanuts and lemonade.

There were eleven performances over the week, five of which were matinees.

As is part of their mission, the Shriners ensured that children less fortunate – those that were orphans or in homes – got a chance to see the circus. Hundreds of children were brought to Music Hall for the matinee. Each child was presented with a bag of peanuts and a ball of popcorn to enjoy while watching the circus.

Following the last performance, The Syrian Temple Shriners said the circus would be an annual affair. The Shriners were pleased with the success, particularly because of the joy the circus brought to the children, even though the run fell short financially.

In subsequent years the circus brought financial success. The Shriners held their indoor circus at Music Hall through 1927 before moving to the newly-constructed Taft Auditorium, part of the new Masonic Temple.