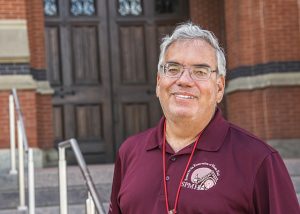 When it comes to tours, Jay Issler is definitely a major league player. He’s knowledgeable and yet so personable that, even in a group, you’re certain he’s communicating directly with you. He’s someone you would readily want as part of your team.

Sports, particularly baseball, have always been part of Jay’s life. In college, he pitched until an injury forced him to reconsider plans to play professionally. With his winning attitude, Jay has coached teams that have gone onto the finals and won national championships.

When he retired after 34 years as a Certified Public Accountant, Jay was eager to do more than sit on the sofa. As you might guess, his thoughts turned to baseball.

Take Me Out to the Ballgame

He approached the Reds with the goal of being a tour guide at Great American ballpark. For over four years, Jay has been a Volunteer Ambassador. He provides tours of Great American Ballpark and the Reds Hall of Fame & Museum. Additionally, for “Legends Remembered,” Jay takes artifacts from the Hall of Fame out into the community, to speak to groups and share memories of the Reds, the Big Red Machine, and Crosley Field, to name just a few.

Jay also attends the Reds’ Fantasy Camp each year. While there, he works with former Reds players as they coach teams. He throws batting practice too, sharing with everyone his passion for baseball and his talents as a long-time coach.

From the Ballpark to Bach and Beethoven

So… how did Jay Issler end up at Music Hall? Baseball has an “off season,” which extends to demands for tours and talks. Because he likes to keep busy, Jay looked around for something to fill his time. He believes “it’s all about staying active.”

Jay and his wife Lynn both love Music Hall and are Cincinnati Pops season ticket holders. Lynn enjoys her volunteer work as an usher at Aronoff Center, so she urged Jay to sign up as a volunteer at Music Hall. Through the Friends of Music Hall online volunteer sign-up form, he discovered the Tours and Education Program and became a Tour Program Guide.

Jay has always recognized Music Hall as a beautiful structure. Now, following training and research, he understands the historical aspect and importance of Music Hall as well.

“They (the founders of Music Hall) had a fantastic goal to get people to Cincinnati through music.” Then, referring to the wings – which were built to highlight industry through expositions – he adds that the construction of Music Hall was “also about the growth of the city.”

Jay’s reverence for the history of Music Hall is reflected in how he feels when he’s in the Taft Suite. During the 2016-2017 revitalization, this room was created using what was once a carriageway between the Music Hall central building and the south wing. In giving tours, he says “I can walk to one side of the room and touch bricks that take me back to 1877, when Music Hall was being built.”

Fascinating stories. Respect for history. Delight in discovery. A passion for Music Hall. When Jay Issler gives a tour of Music Hall, he really hits it out of the park.